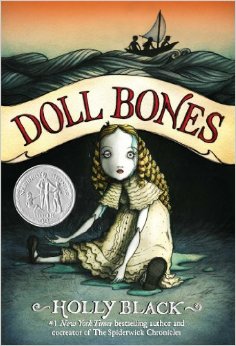 This book is called DOLL BONES, written byHolly Black. It is about three kids named Poppy, Alice and Zach who love playing with dolls. But, the three are in middle school now and Zach’s dad is pushing Zach to join the basketball team and quit girls and dolls. Zach ignores his dad and doesn’t think that his dad will do anything until Zach’s dad throws away all Zach’s toys and gives Zach no choice. Zach quits playing with dolls but lies about the reason. Poppy and Alice continue playing but are suspicious about the reason Zach quit. Poppy and Alice are happy and continue playing until…  Poppy opens her eyes one night and declares that she is having dreams about a girl who is mysteriously murdered and is made into a doll because she is loved so much by her father. The doll desperately wants to be buried. This is the story of the doll: A few years ago there was a girl named Eleanor Kerchner and her father was a sculptor. Her father made all sorts of lovely things like vases and stuff but he loved Eleanor most and never wanted to see her die. But, one day Eleanor was mysteriously murdered and Eleanor’s father came to know. He was so sad that he decided that he was going to use her ashes and bones to make a doll representing Eleanor.  Poppy’s mum bought the doll years ago and never let anybody touch it. Poppy and her friends were scared of it for a while but they decided to add it to their game to make them less scared. The doll becomes the queen of the game and sits in her case watching over everything. But now Poppy takes it out and explains everything to Alice. Scared, they both wake Zach up and tell him about it. Zach agrees to help so long as the girls don’t talk about the reason he quit and they all start to East Liverpool, Ohio since that is the doll’s preference (to be buried). On the way to East Liverpool, Ohio, they have many adventures but I won’t tell you all. All I will say is ‘Watch out for the crazy man!’ Meanwhile, Alice starts to doubt Poppy and thinks that she made all of this up just to be bossy and to get them to do what she wants. It is only when people think that the doll is an actual person – for example, whenever the three go into restaurants, the managers ask if they need a table for 4 people and not three – that Alice realizes that everything was true and she makes up with Poppy. Spooky isn’t it?! I wonder why this happened to them? Has the doll possessed them with her looks and ash?’. Anyways, they land up in a library trying to find the place to bury the doll but somebody or someone takes the doll when they go to sleep and throws it away. The trio looks for her in the morning but the librarian finds them and makes them call their parents! Each child talks with their parent and is told to come back home. Only, the three still have sometime. Zach, Alice and Poppy split up to find the doll and Zach finds the doll in a dustbin and takes her back. Poppy is so happy and gives each of them a job. Alice looks for flowers, Poppy starts to say bye to the doll and Zach digs the grave. Straight after burying the doll, a few honks are heard and the book ends with the three friends walking, relieved, to their cars. The doll won’t trouble them forever now. Or… will it?!
What I like about the book is:
I WOULD GIVE THIS BOOK A 10 OUT OF 10 RATING!
FIND OUT WHAT I MEAN BY READING ‘DOLL BONES’!
YOU CAN BUY IT HERE FOR $5.13 ON AMAZON OR HERE FOR £5.59 AT THE GUARDIAN BOOKSHOP

This review first appeared on the GuardianChildren’s books site