With Kindness Day (Valentines Day) coming around, I decided that I could do something different to start off my book reports once again.

Kindness Day/ Valentines Day is normally celebrated on February 14th, a day where love, unity and kindness is celebrated all around the world! In my school, Kindness Day is a day where we are kind to everybody (no matter who) and wear pink. As part of Kindness Day, we also have a book display showcasing a number of books that also celebrate kindness. This time, I decided to select 5 books that I think celebrate kindness and review them. These 5 books are a mix of both chapter and picture books.

The first one is, ‘WONDER’, written by R.J Palacio. ‘Wonder’ is a chapter book. I

simply cannot express how grateful I am to R.J Palacio for writing this book – and capturing so many different emotions and voices in one story! Wonder follows the stories of 6 people, with the central character being a boy named August Pullman. Auggie was born with a facial deformity, and is often thought unclean and ugly because of this. August has been homeschooled until 5th grade, when his mum (his homeschool teacher) decides that it’s best for August to join an actual Middle School. August, though reluctant at first, joins the Middle School and faces bullying from a particular group of boys and teasing in general. However, August makes some very close bonds with remarkable people (whose stories are also followed in the book). I love this book for it’s strong message to never, ever be put down by other people and never to underestimate your own beauty. Everyone who lives on this planet is beautiful and at some point in life, means well. Though August is the main character, R.J Palacio also explores the lives and challenges that his sister and friends face – problems and inner beauty being the main thing that unites them all. I would definitely recommend this book to anyone doubting his or her beauty, or someone feeling excluded or worthless. Reading this book made me feel physically light and graceful, as well as free and just happy about everything!

The second book is, ‘THE INVISIBLE BOY’, written by Trudy Ludwig. ‘The Invisible 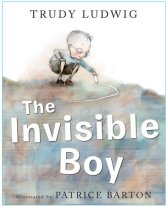 Boy’ is a picture book. The book is about Billy, a young boy who is seemingly invisible. He is often ignored, as many of his classmates are too loud and needy for attention and Billy doesn’t have any friends. He feels invisible and every day it just gets worse and worse, with people completely excluding him from their conversations. However, one day, a new boy named Justin arrives at school. Billy is the only one who smiles at Justin without stopping to judge him. When at lunch, Billy’s classmates tease Justin about his lunch; Billy draws a picture and writes a note for Justin. Seeing this, they become close friends. Justin includes him in his working and friendship groups and makes Billy realize that no one can be invisible – no matter how much they think they might be. I love this book for the way a beautiful story is put into words so simply and yet has so much meaning and life in it. We had this book in my class once and the teacher said to read it when feeling sad or supposedly ‘invisible’. I read it once, when I was under the weather, and I still can’t forget how noticeable it made me feel!

The third book is, ‘WE ALL SING WITH THE SAME VOICE’, written by John Parr Miller. 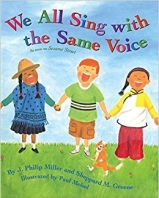 ‘We All Sing with The Same Voice’ is a picture book. The book is about unity in general, and doesn’t have a single main character – but many different voices and characters that form one entire community. John Parr Miller craftily describes people of all races, colours, genders and appearances! Each person describes themselves, their surroundings and nationality in first person – but a common line is, “My name is you”. It is incredible how a picture book that turned into a theme song can make such a big difference with one repetitive line. “My name is you,” indicates a world of unity where everyone is accepting and likes each other,embracing everyone else’s uniqueness. I would recommend this to children aged 4-12 and I’d recommend this to teachers if ever they were talking about discrimination, unity and peace in general.

The fourth book is, “BECAUSE OF WINN-DIXIE”, written by Kate DiCamillo.

‘Because of Winn Dixie’ is a chapter book. The story follows India Opal Buloni, who finds a stray dog in a grocery store and rescues it from getting hurt. She is the preacher’s daughter, and has a very big heart to help people or animals in poor conditions or in danger. Therefore, she takes the dog (who she names Winn Dixie) home where the preacher agrees to let Winn Dixie stay. India and Winn Dixie have a “conversation” whilst India cleanses Winn Dixie. India talks about not having a mother, and she sees a glint in Winn Dixie’s eyes that she thinks suggests something. Therefore, India asks her father to tell her things about her mother, who left the family a long time ago. Slowly, India gets to know 10 things about her mother, who is actually very close and similar to India. Winn Dixie becomes the cause for many positive things that happen in India and her father’s lives. India, for the first time since moving to Naomi, Florida, makes actual friends. She befriends a librarian, a kind blind lady and a slightly pouty girl. Near the end of the book, India hosts a party in which she thinks Winn Dixie runs away. At that point, India comes to a startling realization: You can only have and love something for so long, until it is time for it to go. It was the same with her mother! Fortunately, she finds Winn Dixie. But, I love how the whole story is just entirely based on the title. Some titles of books can be rather ambiguous, but almost everything that happens in the book is Because of Winn-Dixie. The simple message of the book also remains as strong: Do unto others as they would do to you and never judge a book by its cover. The story is very emotional and is woven beautifully, with the ending being the most tragic and lovely!

The last book is, “THEN”, written by Morris Gleitzman. ‘Then’ is a chapter book.

The story is the second book in a series, but I find that the relationships, emotions and tragedy are captured the most effectively in this book. This is the only book of the series that has made me cry so far! The story follows young Felix, who is Jewish. He has previously run away from an orphanage and struggled to survive. However, he befriends a young girl named Zelda and they become an inseparable pair. Felix and Zelda are complete strangers, but Felix’s heart melts when he sees Zelda’s parents being shot right in front of his eyes. Zelda is oblivious of the horrors her parents have faced, and becomes attached to Felix. The two become so close, they consider themselves brother and sister and Zelda fakes her religion so that her “brother” doesn’t get in trouble. It is difficult to find a kind heart in the midst of such an overpowering, cruel war – but every story has a slight tone of happiness in it. Zelda and Felix meet a generous lady named Genia, who takes them in as her own. Together, the three struggle to live and fight for their lives, but stick together as family and friends. Zelda and Felix never let go of each other’s hands, and Felix always practices the most powerful thought in the world: love. However, one day, Felix is left at home, as he was injured. Genia and Zelda go out to the market to gather vegetables. The story takes a twist there, and Genia and Zelda never return. I bawled my eyes out when I finished, so angry with the Nazis and so upset about Genia and Zelda. The end is so powerful, where all Felix’s love and hopes for Zelda and himself become love and sheer anger. He just becomes bitter, numb and sad. I think that it is a very captivating way of describing a very strong bond between two people. Felix turning into a miserable person after the loss of his loved ones was so touching, and perhaps the main cause of the love and my tears for this book.

Overall, these five books are my favourite examples of how simple unity and kindness can be. Kindness really can go a very long way, as Morris Gleitzman proved in, ‘Then’ and how John Parr Miller proved in, ‘We All Sing with The Same Voice’. Yes, people can be unnecessarily unreasonable and rude. Yes, not everyone understands the power of love. Yes, not everyone is nice. But, one person does not represent an entire world. Kindness can go a long way, no matter what or whom you direct your kindness at. Join someone looking sad, lonely or sorry – no one should be feeling alone or worthless, even if they have done something slightly upsetting. Just smile, laugh and talk to people who you may not normally talk to or smile and laugh a bit more than usual. This Valentines Day, let’s remember that everyone has a sweet spot and everyone deserves something good!

One thought on “5 Must-Read Books to Celebrate Kindness!”